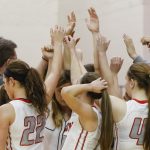 The Irish Varsity cruised to a TRAC-opening victory at St. Ursula on Monday, 12.05, with a 65-37 win. Leading the Irish scoring was Grace Crawford, with 19 points, including five 3-pointers. Also scoring in double figures were Dakari Parish-Baker with 12 points and Masyn Eckhart with 10. Lady Irish Hoops are 1-0 in TRAC play

Lady Irish Varsity Hoops opened the 2016-2017 season with a 54-44 loss at Wayne Memorial HS (in Wayne, Michigan, near Detroit). In a physical contest, the Irish led 27-23 at half, but were outscored 31-17 in the second half, including an 18-point, second-half effort from the Zebras’ Jada Terry. Leading the scoring for the Irish were 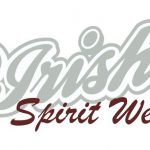 All women’s basketball spirit wear forms are due to the Athletic Office by Friday, November 11.  No late orders will be accepted. Click on the form above to download it. 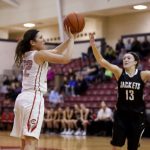 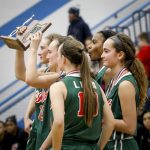 Saturday, February 27, 2016 In a clash of Division 2 powerhouse girls’ basketball teams, the performance of the Lady Irish and the Rogers Rams did not disappoint on Saturday night at Anthony Wayne HS. The tough, hard-fought, back-and-forth battle ended with the Rams getting past the Irish 48-45, to capture the Northwest Ohio D-2 District Championship. Byrdy Galernik 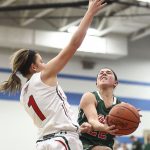 Thursday, February 26, 2016 Balanced scoring and tough defense helped the Lady Irish deal Oak Harbor their first loss of the season, 63-53, at Anthony Wayne HS on Thursday night. Lyndsey Matus and Byrdy Galernik led the Irish scoring with 18 points each. Meghan Hanenkrath added 11 points and an outstanding defensive effort against the

Byrdy Galernik has been voted TRAC player of the year and District Seven Coaches Association Player of the year for the 2nd year in a row. Byrdy was also voted by the coaches in District seven Division 1 and 2 to represent the district in the North vs. South All Star game. Other all TRAC 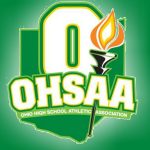 Thursday, February 11, 2016 The Lady Irish Hoops Class of 2016 left the Sullivan Center on a winning note, defeating Fremont Ross, 57-34 and earning a 2nd straight TRAC co-championship! The festivities of Senior Night were capped off with each Senior player taking a bow to the home crowd, cutting down the net and the

No Events This Week

Events are added by athletic staff.
View All Events