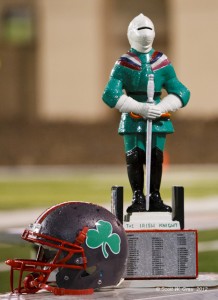 There has only been one overtime game, which occurred in 2003 and one game that ended in a tie back in 1963.

A History from “A Holy War – CCHS vs. SFS, 50 Years of the Battle for The Irish Knight”

On November 8, 1959, the Fighting Irish of Central Catholic and the Knights of St. Francis de Sales met for the first time at the University of Toledo Glass Bowl.  The fans on that chilly November afternoon knew this was a special game that had long been anticipated.  It was after all, the first gridiron contest between two Toledo Catholic high schools since the closure of the original St. John’s High in 1935.  What none could see was how these two schools would serve to define high school football in Northwest Ohio for the next five decades.

The history of the two schools is intimately intertwined.  Ironically, Central Catholic evolved from the old St. Francis de Sales High school on Superior St. in 1914 before becoming Cathedral High School in 1915.  Bishop Joseph Schrembs founded the school we now know as Central Catholic in 1920.  It moved from the original building on Page St. to its present campus on Cherry St. in 1930.  As a diocesan school, Central Catholic was host to numerous orders of priests and nuns as members of its faculty and staff, most notably the Oblates of St. Francis.  By the mid-1950’s, Central Catholic had an enrollment in excess of 2,200 students and the ranks of incoming high school students was escalating every year.  The Oblates determined that there was a need for an all boys Catholic high school alternative in Toledo.  In September 1955, the doors of the new St. Francis de Sales High School opened.  Among its students were many boys that had attended Central Catholic along with many of the Oblates that had taught there.  Although the relationship between the two schools was cordial, the seeds had been sown for a great rivalry.

By the autumn of 1959, St. Francis, which had fielded teams since their first year of existence, had an experienced squad under fourth year coach Bob Recker.  Recker was a ’49 Central Catholic grad and close personal friend of Irish coach, Tom McHugh (CCHS Class of ’50).  Though they had improved through their first three years, many thought the Knights were not yet prepared to do battle with the Irish, a perennial league powerhouse.  As the game drew near, the tensions between the two fronts heightened.  The first annual pre-game smoker which took place in the basement of St. Catherine’s elementary school was intended to be a friendly get together between the rival camps, but it was not without its share of intense confrontations.  The Knights ended up defenting the Irish 28-0, a result which stunned many in the area, most of all the Central Catholic faithful.  But as Coach McHugh reflects now, that loss “was the best thing that could have happened for both schools.”  The Knights gained the confidence to establish themselves as a new power in Northwest Ohio.  The Irish, who according to McHugh had not really taken St. Francis very seriously, immediately refocused their efforts.  Both the coaching staff and the returning members of the teams used that loss as motivation for future success.  It obviously worked as they did not lose to St. Francis for the next six years.  The following season the Irish claimed the City League title together with an eight place finish in the final state poll.  Following a second place league finish in ’61, Central Catholic reached the pinnacle of success with a 10-0 season and Northwest Ohio’s first ever state football title.

The concept of the Irish Knight was the brainchild of CCHS Athletic Director, Tim Dever, and Sr. Mary Genevieve of the Central Catholic Art Department who sought to create some kind of prize to be presented to the winner of the regular season contest each year.  The result was a small knight whose armor was covered in shamrocks.  The Irish Knights has been born.  The current trophy was designed in 1960 and each year the score of each contest along with the winning coach has been inscribed on its mount.  Be it on Cherry St. or Bancroft St., it is the centerpiece of the host school’s trophy case.